" If a word existed that combined professional, friendly, prompt and expert all together, I would use it for the review.  So instead of that one-word review, I'll say the following:

It has been a delight to work with Ms. Chladek.  She made the whole process of diving into my past a fun experience. She replied to my emails promptly and with detailed information and description of the steps to follow and the information she would need from me. I highly recommend her to anyone doing genealogy research."

My family and I have been very impressed by Katja Maria’s work.

We were very interested in finding out about our Austrian grandfather and his family history. She carried out extensive research and was able to provide us with details of his life accompanied by really interesting documentation!

It solved some of our unanswered questions and she spent considerable time and effort looking for information in what was clearly not a straightforward case. The added bonus was when she contacted us after the research was finished to reveal she had discovered some new information that was thought to have been destroyed during the war. We were delighted with what we subsequently learned !
I would thoroughly recommend Katja-Maria. She was extremely helpful, going beyond the call of duty and her extensive knowledge was invaluable!
Cath

"Thank you so much for the research and results.

I'm so glad I didn't try to do this myself. So many Ottos, Antons, and Marias! I would never have figured it out.

"I obtained the assistance of a privat investigator, Frau Katja-Maria Chladek, a specialist in Viennese genealogy based in Vienna, was jolly, courteous and fabulously efficient."

"You have been extremely helpful in this endeavour.... Kind Regards Richard"

My mother was born in Vienna in 1934 to a wealthy Jewish family. After Kristallnacht, she and her widowed mother fled to London and then to the U.S. All of their immediate family and most of their large extended family perished in the camps. A few survived and scattered throughout the world, but they lost touch with each other, and I knew nothing about that side of the family.

About ten years ago I was contacted by a previously unknown third cousin through a Jewish genealogy website. Lucky for us, he had already engaged Ms. Chladek’s services for my mother’s side of the family and was happy to share the results. Katja’s extensive and detailed information was truly remarkable. Later on, we asked her to add to the original information as well as try to discover more about my grandfather’s family, originally from Poland. We were again very pleased with her quick and detailed results.

Not only that, but when my son traveled to Vienna she very graciously took the time to show him the homes and businesses of our ancestors throughout the city, going back five generations to the early 1800s. When my husband and I finally took a long-awaited trip to Vienna in 2016 she planned a detailed 10-hour tour to show us not only the sites of my family’s homes and businesses, but also the site of the synagogue where my grandparents were married, and the vast Jewish cemetery where we saw family plots, many untouched since WW II. It was a fascinating and emotional day, and I finally felt a connection to that side of my family.

Katja has consistently gone above and beyond our expectations. Our time with her was without a doubt the highlight of our trip. We were impressed not only by her superb genealogical skills, but also by her vast energy and detailed knowledge of Vienna, the Austrian empire, and history in general.

It’s been a pleasure working with and getting to know Katja. I can’t imagine a better genealogist in Vienna. She gave me my family, and I’ll always be grateful to her for that. 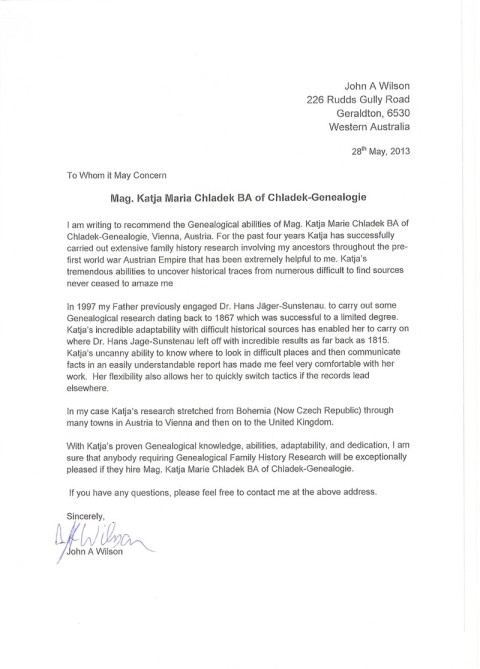 I am extremely happy with the professional services of Mag. Katja-Maria Chladek. In January 2012, I started working with her after deciding to pursue some mysteries revolving my family passing through Austria.

My maternal grandfather had a brother who separated from the rest of the family, and the only information we had was a picture of his tombstone and reports that he died in Vienna. Of course, nothing is easy. Searches by Katja-Maria of several databases showed no evidence of him, but she did not give up so easily. After searching surrounding area cemeteries, an index of Ybbs hinted a possible success, but it was only after contacting a local expert did Katja-Maria prove that my granduncle’s tombstone had been removed by the Nazis, used as building material and later miraculously was one of 75 (of 300) returned to the cemetery in the 1960s though the base of the marker was lost. Katja-Maria tracked down books that confirmed that my granduncle was residing in a sanatorium for mental health and documents that showed his definite cause of death along with dates of birth and death. After three months, I was able to answer all my relatives’ questions about the picture of the tombstone and our granduncle that died so young!

We searched for other relatives that may have passed through Austria, but not much success on those.

When a visit with a distant cousin, revealed a postcard from my paternal grandfather while serving in the Austro-Hungarian Army to his parents at an address in Vienna, I knew that Katja-Maria would be the one to figure out the mystery. His parents lived in Ulanow, Poland. Why would the postcard go to Vienna? She tracked down that my paternal great grandparents were staying at a hotel in the city, by locating the registration of visitors to town. Really! You can locate people who were vacationing in Vienna 100 years ago! Well, of course you need Katja-Maria to help you!

I highly recommend Mag. Katja-Maria Chladek for researching genealogy. I was amazed at how she pursued the leads like a detective on a case! She constantly remained in contact with me regarding successes and failures, and always checking to make sure the charges were acceptable.